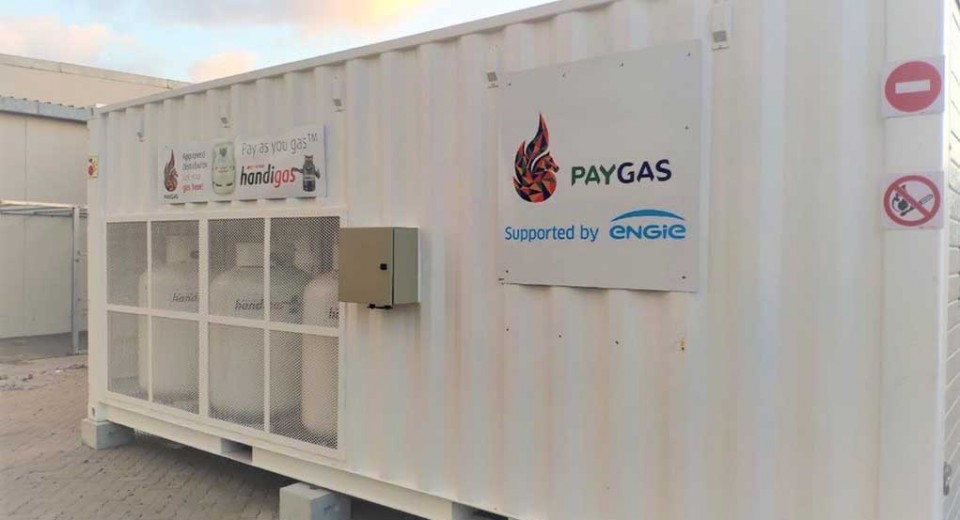 ENGIE Africa announces a partnership with PayGas, the pay-as-you-go solution for affordable cooking gas, to roll out two Pay-as-you-Gas™ stations that will support 20,000 people in Cape Town, South Africa. The 2 stations will be officially inaugurated today in the presence of energy sector leaders and Cape Town officials.

Cape Town, South Africa, July 17, 2020: ENGIE Africa announces its partnership with PayGas, a startup that applies a patented Pay-as-you-Gas™ technology for the purchase of LPG, affordable clean gas for cooking, heating and lighting.

As part of ENGIE Africa’s commitment to energy transition, it is opening today 2 Pay-as-you-Gas refilling stations in Cape Town. The first one, in Nyanga, and the second one, in Philippi. The implementation of this pilot has created 12 full-time jobs and will service 4,000 homes, directly benefitting about 20,000 people.

ENGIE Africa is committed to promoting innovators in the African energy ecosystem, providing them with a range of support tools, including access to its expertise and network building.

Philippi and Nyanga suburbs are among Cape Town’s worst affected by COVID-19. ENGIE Africa and PayGas are committed to deploying this technology, recognized as service for essential needs to help locals already affected by the pandemic to avoid the dangerous usage of paraffin, which can cause fires and health issues such as toxic inhalation.

As of today, PayGas users can purchase an electronic voucher at any local shop, go to the closest Pay-as-you-Gas™ station, and use the PayGas application to fill their cylinder, either totally or partially, for as little as 10 ZAR (€0.5).

PayGas was launched in April 2019 and already has close to 1,700 customers. It opened its first refilling station in the Cape Town township of Delft, servicing more than 7,500 low-income beneficiaries. It aims to deploy 52 more stations in the next 4 years, reaching more than 150,000 customers and creating 300 jobs. The startup is tapping into a €530 million market for low-income household energy inclusion in South Africa, and €180 billion globally.

In less than 18 months, PayGas has won major awards for its disruptive technology in the energy industry, turning into a key player in sustainable energy delivery for the city of Cape Town. It is currently focusing on the South African market and it plans to scale its offering to other countries throughout Africa. In November 2019, PayGas was awarded the Clean Cooking Challenge launched by ENGIE Africa at AfricArena Summit. In February 2020, PayGas was awarded by WESGRO and the CAP 40 in two categories, Smart Cities & Sustainability and Entrepreneur of the Year.

“At ENGIE Africa, we thrive to help entrepreneurs and startups establish stronger connections with the large-scale energy users and investors. We are happy to see this pilot becoming a reality, being a real example of how we elevate the visibility of growing innovative energy solutions and help them to scale up, expand their business opportunities, and gain a foothold in the African market,” explains Carole Henry, Head of Innovation & Digital at ENGIE Africa.

«ENGIE Africa’s support for the 2 new PayGas stations in Nyanga and Philippi is a major step in the commercial deployment of PayGas after the initial pilot phase in Delft. This deployment confirms the role of PayGas as an actor in the energy and digital transition among low-income urban populations in South Africa.» announces Philippe Hoeblich, CEO and Founder of PayGas.

About ENGIE Africa:
ENGIE is the largest independent electricity producer in the world, and one of the major players in natural gas and energy services. The Group has more than 50 years of experience on the African continent and has the unique ability to implement integrated solutions all along the energy value chain, from centralized electricity production to off-grid solutions (solar home systems, mini-grids) and energy services. ENGIE Africa employs nearly 4,000 people, and has 3.15 GW of power generation capacity in operation or construction. It is a leader in the decentralized energy market, providing clean energy to more than four million people through domestic solar installations and local microgrids.
www.engie-africa.com
www.linkedin.com/company/engie-africa

About PayGas:
With its solution Pay-as-you-Gas™, PayGas is the leading pay-as-you-go gas provider in South Africa. Founded in 2018 by Philippe Hoeblich and a team of international experts in the field, it delivers flexible and affordable clean energy to lower-income households across the country. It works through the combination of a pay-as-you-go USSD software payment platform with a cashless refilling station and mobile app, connected to a barcode on customers’ cylinders. For more information visit https://paygas.africa/